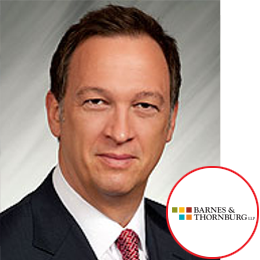 Topic: Explains How Vital IP Security and Risk Mitigation is to the Field of Big Data

Mr. Vare frequently counsels clients on cybersecurity and data protection, privacy, computer and software issues, e-commerce processes, and other business technology matters. He has assisted clients in managing responses to data breaches involving large and small companies, including breaches affecting all 50 states and dozens of countries. He counsels clients on consumer class actions and state and federal regulatory investigations. He also regularly works with clients to develop proactive plans and processes to prevent data breachesand to respond when they occur. Mr. Vare is a member of the International Association of Privacy Professionals and is on the Board of Editors for the Pratt’s Privacy and Cybersecurity Law Report (published by LexisNexis®). Mr. Vare also serves as co-chair for the firm’s Data Security and Privacy Practice Group.

In addition to trial work, Mr. Vare has substantial appellate experience. He argued before the United States Supreme Court in U.S. v. Santos (opinion issued June 2, 2008), which resulted in a victory for his client in a criminal case involving the scope of the federal money laundering statute. He also has successfully argued appeals before the Federal Circuit, Seventh Circuit, Eleventh Circuit, and Indiana Court of Appeals, as well as before the Patent Trial and Appeals Board.

argued motion for judgment on the pleadings that the asserted claims of the patent in suit were invalid under 35 U.S.C. § 101. District court granted the motion and found the patent invalid.

l Represented online sporting goods and apparel company against claims of infringement of a patent directed to e-commerce methods and systems.

l Represented multinational corporation specializing in Internet-related services and products against claims for infringement of patents to callback systems and platforms, including least-cost routing through PSTN and VoIP networks.

companies. The asserted patent covered systems and methods for serial device compaction for improving integrated circuit layouts. The case was settled with each defendant entering into a license agreement to the patent.